They say that all good things must come to an end


A long, long time ago
I can still remember how that music used to make me smile
And I knew if I had my chance
That I could make those people dance
And maybe they'd be happy for a while

But from what I read on Twitter, it may not be the last ever, but it is the end of the weekly download content that has been flowing for years.

We bough so many songs. We probably have more invested in Rock Band songs than we do in the Xbox and all the other games we own.

I have some good memories of playing Rock Band, Rock Band 2, and Rock Band 3 over the years. It's the only video game that my wife played often on our Xbox. She refused to play any instrument other than guitar. Bass was boring. Guitar was a challenge. And she was pretty damn good at it too.

I remember the first time my wife and I gold starred a song and how awesome it felt. Sounds silly, I know, but it was a cool moment.

I remember the day my wife and I decided to go for the "Never-ending Setlist" achievement, and how it took much longer than we expected, and how patient our kids were waiting to be fed, late, that evening. :)

I remember the first time playing drums. And how "real" it felt to nail a tricky beat on expert as if it had never been a problem.

It still amazes me how my fingers seem to magically press all the right buttons in sequence to a seemingly impossible stream of notes cruising down the TV screen.


I remember the first time I got 100% on a song, on expert, and how it made want to thrust my fist in the air and yell "FUCK YEH!"

And sometimes I did just that.

There has always been criticism from the naysayers about how "real" Rock Band is — or not real, as the case may be. "Play a real instrument!" they'd say.

It's a game. A fun game. And for some people, it inspired them to learn real instrument. How can that be so bad?

Good times. Lots of them. With family and friends. And as long as I can make our remaining guitars and drum kit last, the good times will last.

That almost sounds like I'm a farming blog entry...

Anyway, my left calf seems to be healing well. I still don't know exactly what was wrong with it, but I'm limping less and the discomfort isn't happening as often.

At one point last night, while I was walking up to my front door, I realized that I wasn't limping at all and there was absolutely no tightness for about 10 steps. That's promising.

I'm anxious to resume my workouts, but I think when I do I'll be skipping anything that involves jumping or hopping or jogging for a while. Doing half the routines will be better than none at all.

I had a dream last night that I was cycling. I'm hoping that's a good omen of what's to come this spring. :) 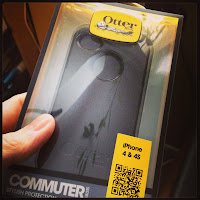 It took a little longer than the last time, but the new warranty replacement Otter Box for my iPhone arrived today.

Again, I love the no hassle warranty on these. Clearly the original investment was worth it since it has spared my phone from damage after (more than) a few accidental drops. While it's a bulkier case than most, it does the job and it does it well. I don't think I could use any other case.

I was nearing the end of a "fitness evaluation" in the Nike+ Kinect game yesterday afternoon when my left calf went pop.

Whatever it was or whatever it felt like, it put a quick end to the evaluation/workout. Worst feeling ever.

The best way I can describe it was like it was a really bad muscle cramp. I tried to massage it out and it seemed ok until I stood up, leg straight, and tried to put weight on the ball of my left foot.

The rest of the day was spent on my ass, leg up, alternating hot and cold compresses.

My left calf doesn't look any different. Pretty much the same as my right. No obvious swelling. No bruising. I can move my foot in all directions without any difficulty. I can stand, knees slightly bent and squat without discomfort. No pain or discomfort while resting. No burning sensation. So I don't think it's torn or anything like that.

It's only when I try to walk and put weight on the ball of my foot that I get that tight cramping sensation in my calf.

I guess I'm now out of commission for a while.

I received an email from Otter Box on the weekend, informing me that I didn't send correct photos. Apparently, my name and address had to be HAND written on the piece of paper. I'm not entirely sure why that makes a difference. My best guess is so that I'm not using someone else's photos, where it would be easier to put a digital name and date on them?

I sent off new photos and within the day got another email informing me that it's no being processed.

After much "encouragement" from a friend at work, I started a beer blog for fun:

Questions or comments... read the "FAQ" page there. :)