After almost a year of waiting, my Pebble E-Paper Watch finally arrived yesterday!

I invested in this Kickstarter project at the $115 level a few weeks before it had ended. Because I'm in Canada, I paid an extra $10 for S&H.

What this got me was a black Pebble watch. 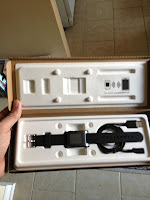 The box it arrived in was pretty cool. The unboxing was really uneventful  Pull the cardboard "zipper", flip open the top and voila.

A watch and a USB charging cable, with instructions on the inside telling me to go to go.getpebble.com to configure it.

I already had the iOS app installed, so the phone was paired via Bluetooth and running in no time, after it received a firmware update during this process. (I read messages after on the Pebble Facebook that some people's watches were bricked during firmware updates..)


Using the phone app, I can send a "ping" to the watch to verify that it is paired (it makes the watch vibrate), or I can choose from 11 additional watch faces to add to the 3 or 4 that came with the watch. You can't load them all at the same time. I tried and it told me I had to remove some before I could add more. I narrowed my choices down to 7 for now. I assume if I ever add an other functionality to the watch in the future, I may have to remove more to make room.

I don't think the app does much else that I can see. During the initial fundraising they talked about a cycling app to track stats in conjunction with your phone. I hope that's still coming because that's the main reason I invested.

The watch itself is plastic and seems quite durable and lightweight. The strap is some kind of rubber and I think it'll last as well. It supposedly a standard size strap so can be replaced by any watch strap if I wish.

One thing that I'm not particularly fond of is its size. Maybe my wrists are a little narrow for a 6'3" 230lb man, but as you can see in the photo, it's fairly large.

On top of that, I haven't worn a watch in a long time so this will take some getting used to.

There's a grand total of four buttons on the watch. One on the left, beside the magnetic charging... err... nubs? This is basically the "home/back" button. On the right, there's an "up", "select/menu", and "down" button. 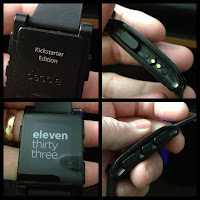 The watch can be turned on by holding down any of the buttons for 2 seconds. Pressing the middle (select/menu) button opens the menu where you can choose the music feature (to control your phone's default music player), set an alarm, choose from the installed watch faces, or go into settings where there are some very basic configuration settings, and an option to shutdown the watch.

What exactly does the watch DO?

Well, I can only speak for the iPhone pairing, but when your SMS/iMessages are configured to display notifications on the home screen, they will also appear on the watch. The watch will also vibrate to let you know. That's pretty handy if your phone in your pocket or bag. Not that you can only read the message while it's displayed. If you press the home/back button, it's gone and you'll need to read it from your phone. I know that's by design, and probably not such a big deal to most people. I just think it would have been cool if it cached a few messages to read later. It also does the same thing for emails. If the message is long, the up/down buttons will let you scroll to read it all.

It can also control the iPhone's default music player. Play/pause and skip fwd/rev. It seems to play your music list in shuffle mode.

That's about it. For now?

The battery life is supposed to be 2-7 days. That seems like quite a varied range. The last firmware update supposedly improved it after some were complaining it was less. We'll see how this goes.

The charger cable is kinda cool. It connects via two small magnets and plugs into any 5v USB port/charger. This also makes the watch waterproof up to 5ATM.

Because it is waterproof, there is no way to replace the battery when the watch finally dies. That's it, that's all, it's dead.

The watch now sells for $150 USD from the Pebble web site. They're still fulfilling Kickstarter backers and then the pre-orders, so expect a very long wait if you decide to order one. Many backers are becoming irate.

Is this watch worth $150 USD? I'm somewhat undecided, at least with its existing functionality. If apps start coming out for it, then may I'd lean more toward yes. I'm still hoping for the cycling stats app.

But then again, if you're the extremely geeky "must have" type, you might want one anyway.

Today I was thinking that it's almost time to start cycling again. I checked my saved GPS logs to see what day I started last year and it's actually 1 year ago tomorrow.

There's still a little bit of snow on the ground due to a surprise snow storm over the last two days, but I think next weekend will be the first time out for this year. I hope so anyway.

My shoulder has been feeling pretty good, overall. I've had a few days where it didn't feel quite right, but I can associate those days with not doing any workouts in the days prior.

Whenever I go for a couple of days without any workouts, I can feel my arm and my shoulder begin to stiffen up, and then I also feel it in my neck.

Ever since I pull my calf muscle, my workouts have been very sporadic. I'm sure there's some laziness thrown in there, but mostly it's because of a fear that it's going to happen again. A few times last week, I felt the calf muscle tighten up just from walking up stairs. It's been ok for the last week though.

I have to make more of an effort to do something. Anything, to keep them loosened up, or I'm going to be in the same situation as last year.

For such a lazy bastard that I can be, I sure love cycling. Without it... I don't know what I'd do. I don't think of it as exercise as some people might. A motorcyclist could probably relate to the same feeling that it gives me. Except this is under my own power.

I mean, does anyone really like "Spamlamdex Quick'n'Easy Hair Removal"?  So I made that one up, but it isn't too far fetched if what this article describes is true: Facing Up To Facebook Scams

It's apparently called "Like farming". I'll paraphrase what the article says:

What kinds of images are we talking about?

Others that come to mind are "How many squares in this picture?", "Type (some word) in the comments to see what happens next!", and any mathematical equation images like "4+1x0+2=?".

There are hundreds of groups that consist of nothing but funny pictures. Humourous greeting cards. Cute kitten pics. Inspirational sayings. Funny quotes.

It wouldn't surprise me if many of those exist for this very reason.

If you Google "Like farming" you 'll find other similar articles about it.

The way I see it, unless your friend actually uploaded that image you Liked, expect the unexpected to appear on your timeline.

You can probably minimize the like-related ads by going into your Likes on Facebook and cleaning them up, "Unlike" anything that looks suspicious or that you don't remember liking.
Posted by Scott at 8:07:00 AM No comments: