Last night, for the first time, I was able to put my hand inside the cage and give Kevin a couple of treats, as he hid inside the tube to his eating area. He doesn't seem to like the sunflower seeds as much as I expected. I had hamsters when I was younger and they loved them. Pumpkin seeds and, what I think are, watermelon seeds seem to be his fav.

Even when I don't have treats for him, I hold my fingers near the cage so he can get used to me. He doesn't run away as often.

He still fills his water bowl with bedding. I had to clean it twice this morning before I left for work. I need to find something better soon.

On Tuesday evening, I made my first real attempt to hand-feed Kevin treats through the bars. He accepted them without too much trouble and came back for more many times, but he tends to run off to eat them. He's very quick.
He has a really bad habit of filling his water bowl with bedding and I have to clean it out and refill it. I need to find a small water bottle that will fit through the bars of the cage. Pet Valu didn't have anything suitable. 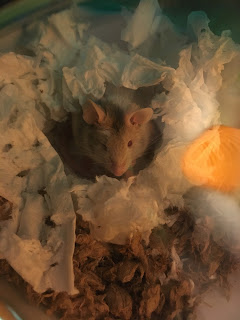 This evening I hand-fed him more treats through the bars. I feel like he's getting used to me now, but I'm still not confident enough to attempt to pick him up for fear he'll jump out of my hands and get lost in the apartment, or worse, hurt.
Posted by Scott at 8:35:00 PM No comments:

I managed to clean Kevin's cage on Sunday. I waited until he was in another area of the cage, then disconnect the other parts and cleaned them. He's still very skittish. When he smells my fingers or I put my face near the cage, he scampers off to his eating "room". I would too if I was him.

This morning, I left small strips of paper towel in his cage and he used them to "wallpaper" his sleeping quarters. I gave him a full sheet of tissue later in the evening and he managed to figure out how to get it up to his sleeping area; he dragged it backwards up the pipe. Smart little guy. 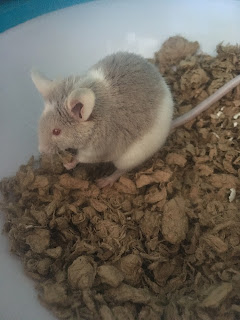 Today I adopted Kevin from the Ottawa Humane Society. He's 6 months old and was born on March 16, according to his papers. He cost me $10 and they included the cage. I picked up some food while I was there for $9. 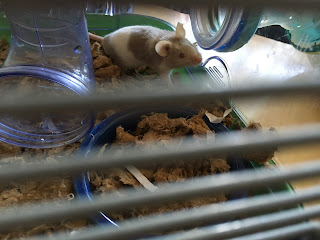 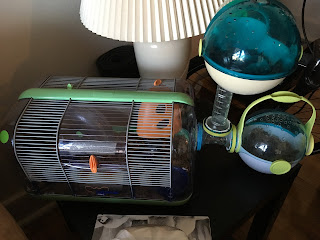 The adoption process was easy and fairly quick. They had a few other mice to choose from, but I think when they said I'd want Kevin once I saw him it gave him an advantage. :) They said they usually sit his cage on the counter and he's active all day. When I was leaving they asked me if I was going to keep his name and I said I would. It suits him.

I walked to the nearby Pet Valu later in the afternoon and purchased some treats and fresh bedding.

I'm not even going to attempt to pet or pick him up for a while. I've had hamsters and a rat in the past, so I know how to approach the situation, but he's way more skittish and fast than they ever were.
Posted by Scott at 7:00:00 PM No comments: