I discovered this last week while trying to find a fix for an issue I had with my ContourROAM camera not keeping the correct time:

How To Upgrade ROAM1 into ROAM2

There are other web sites and videos that all describe the procedure. Be sure to install the Contour StoryTeller software and check out some of the other new features that get added.

There is one complaint about doing this though; it doesn't record well under low light after the upgrade. If filming at night is important for you, don't do it.

I'm doing this in June. If you're reading this and can spare a few bucks, click the link! :) 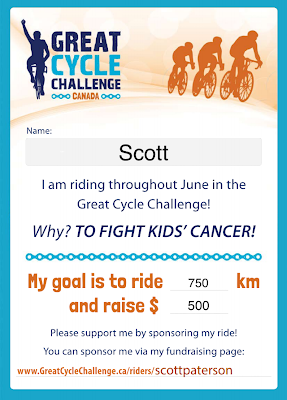 I discovered another perk of riding a pedal-assisted e-bike; it's easier to get from one green traffic light to the next without hitting a red light.

I changed things up a little for this morning's commute and rode over to the Gatineau side bike path, and then crossed back over to Ottawa and continue along part of the Ottawa bike path. Compared with last year's time for the same route, I shaved about 4-5 minutes off the total time, and my average speed went from around ~21km/h to ~25km/h. However, I did find that I was still pushing harder than I probably needed to and I was starting to break a sweat when I arrived at work.

I'm a little concerned that I'm not getting the suggested distance off a full charge of the battery. For a 15km ride, with a few steep hills, the battery went from 100% to around 60%. That's good enough to get home using the same route, but apparently I should get close to 80kms on full charge using the lowest assist level. Hopefully this is due to the pretty chilly mornings and it'll get better as the weather warms up. I know I'm also a little bigger and heavier than the person this bike is designed for. I'd be fairly happy if I could get 60kms on a full charge.

So... it is a little faster

My ride home from work yesterday was fast. I'm pretty sure it was faster than any previous ride on the same route, at just over 31 minutes.

I checked my average speed for the route and compared it to last year. Most of my rides last year were in the 18-19km/h range. So far, this week, it's 21-23km/h.

So, whatever I said about an e-bike not being faster, I take I take it back. I'm anxious to get back to riding along Ottawa River path where there are almost no stops. Once the Ottawa Locks open for crossing, that'll be my route.

I rode to work on the Neo Carbon today and it went well.

Despite how uncomfortable the seat looks, it wasn't bad at all. I do feel like I'm leaning more than on the Allegra, but I don't think it's going to matter for commuting purposes.

The new placement of the year paddle and brake lever work well and don't feel awkward at all. I found a video review of the bike that zoomed in on the right handle bar controls and I can't figure out how they work without hitting each other while mine didn't.


The downshift paddle that you can't really see in the photo hits the throttle.

The acceleration of this bike is great. I found that I can take off from a stop in the highest gear without any problem. I rode it on the lowest assist setting for nearly the entire ride. I was just starting to break a sweat when I arrived at work. My brain is still stuck in a "go fast" mode, despite the assist.

One little thing I need to get used to is the sensitivity of the sensor that detects when you pedal. When I stop at a light, I usually have the right pedal up and my foot on it. On this bike, it detects the pressure on the pedal and sometimes makes it want to assist and the bike starts to move on its own. I need to remember to keep a hand on a brake to kill the power to the motor.

The weather forecast for this week looks good, so I should be able to ride for the rest of the week. I hope.

It was a great ride. The seat was more comfortable than I expected, although I suspect I'll still replace it at some point. The pedal assist and throttle control are amazing; way better than the Ion.

I agreed to the swap and they got it ready for me while I waited and enjoyed a coffee.

When I was riding it home, I had some trouble changing gears. The shifter was hitting the throttle control. I had to really force it to shift down. Once I was home, I had a closer look at it. Surely, this wasn't the way it was designed? They had told me at the shop that they tuned it up, and replaced the grips, so I'm guessing parts were removed and put back on and somehow this was overlooked. Anyway, I swapped the order of the brake lever and gear shifter on the handle bar, which made more space for the shifter and that fixed it. I haven't taken it for a test ride, but I'm confident that'll do it.

I also moved my carrier rack from the Allegro to the Neo Carbon without a hitch. The flat carbon look of the rack really goes well with the bike. :)

I'm really anxious to start riding it to work. Seeing as how this is also used, I've got a 60 day warranty to ride the hell out of it to work out any issues.
Posted by Scott at 7:27:00 AM No comments: 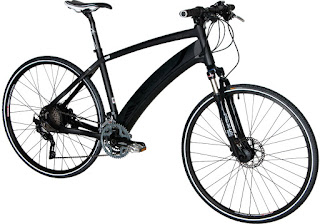