My wife and I (and daughter and niece) took a trip down to WinterBrewed last Saturday to sample some fine craft brews. Just to clarify, my our daughter and niece didn't do any sampling, they were there for the food. :) Our timing must have been good because we didn't have to wait long for anything, unlike those who arrived later in the afternoon and had to endure 30 minute lineups just to purchase tokens to sample the brews. This was the first time they held one in the winter, and the first time on Sparks Street. Hopefully they work out the glitches for next year.

Since my wife was DD, I did most of the sampling. :)  My favourite was the St. Ambroise maple. I would have liked to sample more, but we ran out of tokens and it was rather chilly. I'm sure the next National Capital Craft Brew week this spring will be much more comfortable.

My shoulder felt pretty damn good since the last physio appointment. I had another appointment this past Friday as well. I mentioned to my physiotherapist that I had been doing a lot of workouts, focusing more on upper body. She said the increased blood flow to my shoulder is likely why it's been feeling good. I'm really looking forward to spring when I can try cycling again.

My weight loss isn't going so well, but at the same time it's not bad either. Although I really haven't lost much, I haven't gained either. (I blame the beer and weekly pizza, but I'm not about to give up either)  When I can, on the weekends, I've increased my workouts. I've combined the Nike+ workouts with the 'ol Your Shape Fitness Evolved workouts, and a little Kinect Sports Season 2 thrown in at the end for fun. That ended up being 2 hours worth of exercise today. :)

My wife and I went to the Bon Jovi concert this past Wednesday. We sat in the 300 level, and they only cost me about $40 per ticket (after surcharges and tax)  I have to say that they were the best cheap seats I've ever had for a concert. 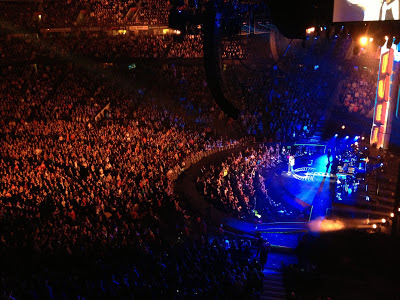 They still sound as good as they did about 25 years ago when I first saw them. Clearly, they're still just as popular too — the arena was packed.
Posted by Scott at 6:48:00 PM No comments: