He still eludes being held or touched.

Here's one from the other night that looks promising. :)


The video makes him look huge, but he's really not as big as he may seem.

When I eat breakfast, he hangs on the side of his cage waiting for a taste. It's usually a bran flake from my Raisin Bran. He loves them.

Once I can find a larger table, I plan to connect another cage to his so he has more space to explore.
Posted by Scott at 8:58:00 AM No comments:

Kevin can also bite harder than he has been.

Last night I decided to give Kevin a special treat: peanut butter. I have read that they can eat it, in very tiny amounts. Too much and it can block their airways(?) I guess that makes sense, since it's very sticky.

Anyway, I smeared the tiniest amount on my finger tip and offered it to him. He licked and nibbled at it until it was gone. He then wanted more. I gave him more. This time, he decided to bite my finger. He bit it fairly hard too, although it didn't break skin or leave a mark. This is more inline with what I originally expected. :)

I also tried a few times to pick him up, but he wouldn't have any of that.

Earlier in the week I placed a large rock in his cage for him to climb on, and hopefully wear down his little nails. I noticed they were getting a little long, and since I can't hold him to trim them, this is the best I can do. 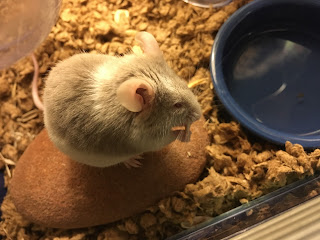 He was cautious at first, but now he seems to like it.

His routine now is to climb up to the door and almost immediately he'll climb back down and wait for me to put my hand in the cage and offer him a treat. He knows that I won't give him anything at the door anymore.
Posted by Scott at 9:10:00 PM No comments:

It turns out that Kevin doesn't like carrots. I tried to give some as a treat and he completely ignored it and wanted to bite my finger instead.

I got brave and let him take a bite. Or two. Or three. Or ten.

It didn't break the skin or hurt at all. Either he went easy on me or that's the best he can do.


I tried to coax him onto my open hand later, using a few different seeds as bait. He seemed puzzled and bit me a few times. Again, no pain or blood shed, but he was pretty determined to make my hand go away.

I think his biggest problem is that he closes his eyes when he puts his face near my hand. He goes into cautious, defensive mode. I guess he's protecting himself in case I attack? His vision is already bad because he's a mouse, but with his eyes closed he can't see where the seeds are to grab one so he just bites at random with hope that he'll find an edible snack.

Anyway, I think this was a huge step in building trust with him. I wish someone had told me that the bites didn't hurt or draw blood. Is this really normal for a domestic mouse?

When he climbs up at the door, he's starting to look down at the table more often as if he's tempted to jump down. I still try to avoid giving him any treats when he's there, and instead give them to him inside his cage.

Kevin is still eluding my attempts to pet him or hold him. He does seem to be getting used to the hand intrusions in his cage though. Even my kids were able to almost pet him yesterday when they were over.

One of these days I'll keep my hand in the cage when he attempts to nip me and see if he'll try it more than once. :)

A Google photos compilation video of a bunch of clips...

This week I discovered that Kevin doesn't particularly like "the big hand" going inside his cage.

I thought we were making good progress toward him being held, so I attempted to pet him while he was inside his cage. If he ran off, all I had to do was stir up the bedding on the floor of the cage a little and he'd come running back to make me stop.

He tried to nip at me a couple of times as if to say "No, we'll have none of that. Beat it!" No broken or even scratched skin, but they were definitely his teeth that I felt. It was still kind of cute. He was getting a little too excited, so I gave him a few treats and left him alone.

Last night i tried a different approach. I've stopped giving him treats by allowing him to climb up to the door and hang out to take them from me, and instead I am now putting my hand inside the cage to give them to him. I think he just needs to get used to having my hand in the cage to build more trust.

Kevin is getting better about coming to the cage door for treats. I tried to pet him a few times last night when he climbed up to see if I had anything for him. Needless to say, he dropped back into the cage and scurried off quickly. :) 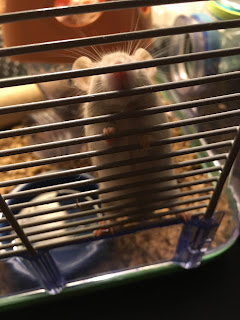 Kyle and Kaitlyn came over for dinner and had fun giving him treats. We had to coax him down though since he seemed more interested in sleeping.

Later in the evening I tried putting a seed in my open hand and resting it on the cage bottom. He approached very cautiously to smell my hand. He even tried to nip my finger once; I felt his teeth brush against my finger. One thing I noticed, and Kaitlyn also noticed, is that he squints when he's taking food from you. I think that's a sign that he's still a little bit afraid.
Posted by Scott at 12:53:00 PM No comments:

Last night, for the first time, I was able to put my hand inside the cage and give Kevin a couple of treats, as he hid inside the tube to his eating area. He doesn't seem to like the sunflower seeds as much as I expected. I had hamsters when I was younger and they loved them. Pumpkin seeds and, what I think are, watermelon seeds seem to be his fav.

Even when I don't have treats for him, I hold my fingers near the cage so he can get used to me. He doesn't run away as often.

He still fills his water bowl with bedding. I had to clean it twice this morning before I left for work. I need to find something better soon.