We have a bit of a history with Ford and Jim Keay Ford Lincoln. Click here to read if you're interested.

We've been dealing with them for about 15 years now. We've leased 4 vehicles and purchased one in that time. There's been good times, and there's been bad times. After today, regardless of the outcome, I think we'll be severing our ties with them.

My wife brought our 2008 Ford Escape in for an oil change, check-up and tire rotation. After the service and paying the bill, they mentioned to her that they "noted" there was some door damage. She didn't think too much of it. We have the odd minor door ding here and there, received from not-so-careful people who park beside us in mall parking lots. Who doesn't?

When she got to our Escape she saw this. 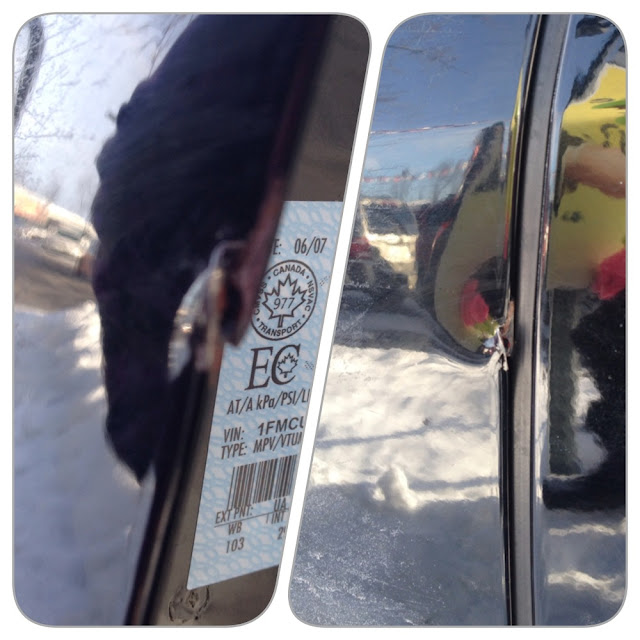 She walked back into the dealership and told them that this was not there before she brought it in.

The guy at the counter went to speak with the people who worked on our vehicle and, not so surprisingly, came back to say that nobody knows what happened.

They told her that the customer service manager would call her on Monday. She tried to get the name of someone higher because we've dealt with him before and he lacks customer service skills. She didn't get very far. Apparently, his boss is Jim Keay himself, and nobody there seems to have any contact information for him.

She also had to tell them to take photos of the damage for their own record. She had two photos taken with her cell phone, but they would have had none.

I'd like to think that they'll immediately own up to this and make good on it, but based on our history with them I fear this isn't going to be easy. Someone there already had the chance to come clean and chose to lie.
Posted by Scott at 3:04:00 PM No comments:


I may have over-worked my left shoulder on Sunday. I think it was due to a combination of an unscheduled workout that I decided to do, and then installing shelves on our living room wall.

The burning sensation in my shoulder and bicep drove me crazy while I tried to sleep Sunday night, and most of the day on Monday. Monday was also my scheduled workout day. I was hesitant to do it, figuring I'd give my arm a rest, but in the end decided to go ahead and skip anything that seemed like it might be rough on my arm. Luckily for me that only meant skipping one set of knee push-ups. The rest of the workout went fairly well.

I slept a little better last night, but still not as good as I would have liked. I was sure that today I'd have a better day, but I think it was worse. On a few occasions today I had to get up and walk around. Sitting just seemed to make my arm worse. Strangely enough, this evening as I type this it's not too bad at all.

I may have figured out part of the cause at work. Although my chair is one of those ergonomic styles, I think the arm rests were a little too low, so my arm was doing more hanging than resting. The big test will be tomorrow. I can't put up with more discomfort.

On the plus side, it looks like the Nike Kinect Training game is syncing better with the Nike web site. My score is still a little off, but it's not giving a disconnect error anymore. Xbox support had also posted a msg in their forum that they were aware of issues and they took it down temporarily to fix it. That was before I tried it, so hopefully there's still some fixing to do so my scores are in sync properly.

I have now completed one week of the Nike+ Kinect Training. I don't recall the YSFE (Your Shape Fitness Evolved) being this tough at the start. I guess my age could have something to do with it. :)

But, it is getting easier the more I do so I have to keep at it.

My shoulder is really bothering me more often than I thought it would. There are some floor routines, like Burpees, Mountain Climbers and The Plank or Plank to Push-up (or whatever the hell they're called) that are killers. I hope they get easier and aren't making my shoulder worse.

Today I decided to squeeze in an extra workout and discovered how to skip a set. It was plank to push-up and my left arm could not go beyond 8 reps to the required 10. I've always been weak with my left arm and push-ups, so having a weakened shoulder definitely didn't help the situation. Hopefully it improves over time.

The biggest difference I've found with the Nike game compared to YSFE is the affect on my abs. I never felt it this much in my abs before. They hurt, but it's a good hurt. No doubt the floor exercises play a big part in that.

So far there hasn't been any real weight loss difference. It fluctuates 5lbs both ways all the time, and that's all I'm seeing right now. Once it goes down more often than it goes up, I'll know it's making a difference. At least I feel good that I'm doing something. I hate how being inactive makes me feel like shit.
Posted by Scott at 5:54:00 PM No comments:

I have now completed two days of the Nike Kinect Training.

While it is broken out into many smaller routines in a workout, I have to say that I think I ache more after than I recall with YSFE (Your Shape Fitness Evolved).

One thing that I really like is that it gives you a break between some routines. It may only be 30 seconds or so, but it is much needed. :) YSFE didn't do that. You had maybe 5-10 seconds max during the intro for the next routine.

One thing I don't like is that you can't quit. Maybe that's a good thing? I've always sucked at doing push-ups my entire life. Now with my bad shoulder, I suck even more. My "trainer" had me do 15 knee push-ups. They're obviously easier than standard pushups, but I stopped at 10 and she wouldn't give up. I thought the game might recognize that I was laying flat on the floor after 10 seconds or so and move on but nooooo. So I had to do half-assed, pathetic pushups to get it to at least count them up to 15 so we could continue. O_o 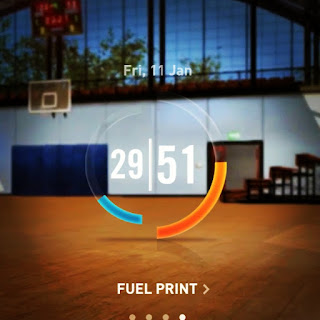 This was my Fuel Print from after the fitness evaluation that I completed on Friday. I have some work to do.

One last thing... there seems to be a problem with connecting to the Nike servers from within the game. I checked the Xbox forums and everyone seems to be having this problem. The result is that the in-game stats are not syncing with those on their web site, or within the mobile app. Someone posted a tweet that Nike is aware of it and working on it. I hope that's true and is resolved soon. I don't want to see a repeat of the YSFE sync issue.
Posted by Scott at 8:25:00 AM No comments:

I managed to get the domain redirected and have dropped posterous and returned, entirely, to Blogger.com. All links — scottpaterson.org and www.scottpaterson.org — should point to here now. From a reader's standpoint (all two or three of you) this should be transparent.

Over the next little while, I'll probably play around with the different templates to find a look that I like.

I have also linked this blog to my Google+ profile.

Email ThisBlogThis!Share to TwitterShare to FacebookShare to Pinterest
Categories: blogspot 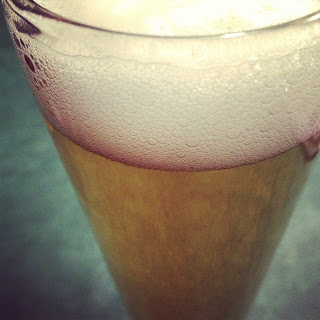 Email ThisBlogThis!Share to TwitterShare to FacebookShare to Pinterest
Categories: beer

Yup, it's been a while. Way too long. Merry Christmas and Happy New Year, and all that crap. :)

So, to update... my iPhone was replaced and is fully functional. (knock on wood that it stays that way) Restoring the data from the backup was relatively painless, although I have to admit that I held my breath a few times as the phone updated.

Once I was back online, I got some strange error that seemed to be related to the Telus network, for which nobody had a solution for. It cleared itself up after a couple of days. I suspect it had to do with transferring the SIM card and auto-registering the replacement phone with Telus. I have no clue, but since it doesn't happen anymore I don't really care.

My shoulder and neck issues still exist. Some days are good, some not so good. I've been to physio twice since the last update. I always feels great when leaving there. I really have to get an appointment with my family doctor so he can give me a referral for massage therapy, which my physiotherapist recommended for my shoulder.

Again on the health front, I think I have Olecranon bursitis (aka water on the elbow) My elbow doesn't look different, but man does it hurt when I lean on it a certain way. It started off as a small area of pain that was difficult to find and increased to a larger area capable of causing a nasty burning pain when leaned on. And there's really nothing I can do for it, other than try to avoid leaning on it.

In other news, I have decided to get off my ass again and resume workouts. My weight hasn't been very stable lately as a result of too much holiday indulgances and my recent hobby of trying new beers. In fact, it's on the increase and since I don't want to stop enjoying my new hobby, I have to start paying the "beer tax".

I first went back to the Your Shape Fitness Evolved game. While it worked for me the last time, it's now way out of date. I considered getting their 2012 version but the bugginess and lack of support from Ubisoft for well-known issues left a bad taste in my mouth. After reading their forums, it would appear that some of those issues still exist with the new version. I also found out that they're not making a 2013 version for the Xbox, only for the Wii U.

So, I decided to give the Nike+ Kinect Training game a go. I've only completed the fitness evaluation and one workout session so far, but it's pretty intense and I'm still aching after yesterday. My workout days (for now) are Monday, Wednesday, and Saturday.

On a different note, I'm thinking about maybe ditching the blog on Posterous and only having it on Blogger.com. I currently write it out and publish it on Posterous, and then autopost it to Blogger, but I think most of the traffic is heading to the Blogger location. In fact, it's rare that I get any comments here, but I get them on Blogger. If I can figure out how to get the domain to redirect, any changes should be transparent to anyone who happens to read this.